Recent explosive volcanic deposit around a fissure in the Cerberus Fossae system.

Evidence of recent volcanic activity on Mars shows that eruptions may have occurred in the past 50,000 years, according to a new study by researchers at the Lunar and Planetary Laboratory at the University of Arizona (UArizona) and the Planetary Science Institute.

Most of the volcanism on the Red Planet occurred between 3 and 4 billion years ago, with smaller eruptions in isolated places that continued perhaps as recently as 3 million years ago. ‘years. But, until now, there was no evidence that Mars could still be volcanically active.

Using data from satellites orbiting Mars, the researchers discovered a previously unknown volcanic deposit. They detail their findings in the paper “Evidence of a geologically recent explosive volcanism at Elysium Planitia, Mars, published in the journal Icarus.

“It is possibly the youngest volcanic deposit ever documented on Mars,” said lead author of the study, David Horvath, who conducted the research as a postdoctoral researcher at UArizona and is now a researcher. at the Planetary Science Institute. “If we were to compress the geological history of Mars into a single day, it would have happened at the very last second.”

“When we first noticed this deposit, we knew it was something special,” said Jeff Andrews-Hanna, study co-author, associate professor at UArizona Lunar and Planetary Laboratory and lead author of the study. “The deposit was unlike anything else found in the region, if not on all of Mars, and more like features created by older volcanic eruptions on the Moon and Mercury.”

Further investigation showed that the material’s properties, composition and distribution are what one would expect for a pyroclastic eruption – an explosive eruption of magma driven by expanding gases, much like the opening. of a shaken soda can.

The majority of volcanism in the Elysium Planitia region and elsewhere on Mars consists of lava flowing on the surface, similar to recent eruptions in Iceland studied by co-author Christopher Hamilton, associate professor of lunar and planetary sciences at the Arizona. While there are many examples of explosive volcanism on Mars, they happened a long time ago. However, this repository appears to be different.

“This feature covers the surrounding lava flows and appears to be a relatively cool, thin deposit of ash and rock, representing a different eruption style than previously identified pyroclastic features,” Horvath said. “This eruption could have spewed ash up to 10 kilometers into Mars’ atmosphere. It is possible that these types of deposits were more common but were eroded or buried.”

The site of the recent eruption is about 1,600 kilometers from NASA’s InSight lander, which has been studying seismic activity on Mars since 2018. Two earthquakes, the Martian equivalent of earthquakes, have been discovered in the region around the Cerberus Fossae. , and recent work has suggested the possibility that these could be due to the movement of magma deep underground.

“The young age of this deposit absolutely raises the possibility that there may still be volcanic activity on Mars, and it is intriguing that the recent earthquakes detected by the InSight mission originate from the Cerberus Fossae,” Horvath said. In fact, the research team predicted that this would be a likely location for Marsquakes several months before NASA’s InSight lander landed on Mars.

A volcanic deposit like this also raises the possibility of habitable conditions below the surface of Mars in recent history, Horvath said.

“The interaction of the ascending magma and the icy substrate of this region could have provided favorable conditions for microbial life quite recently and raises the possibility of an existing life in this region,” he said. 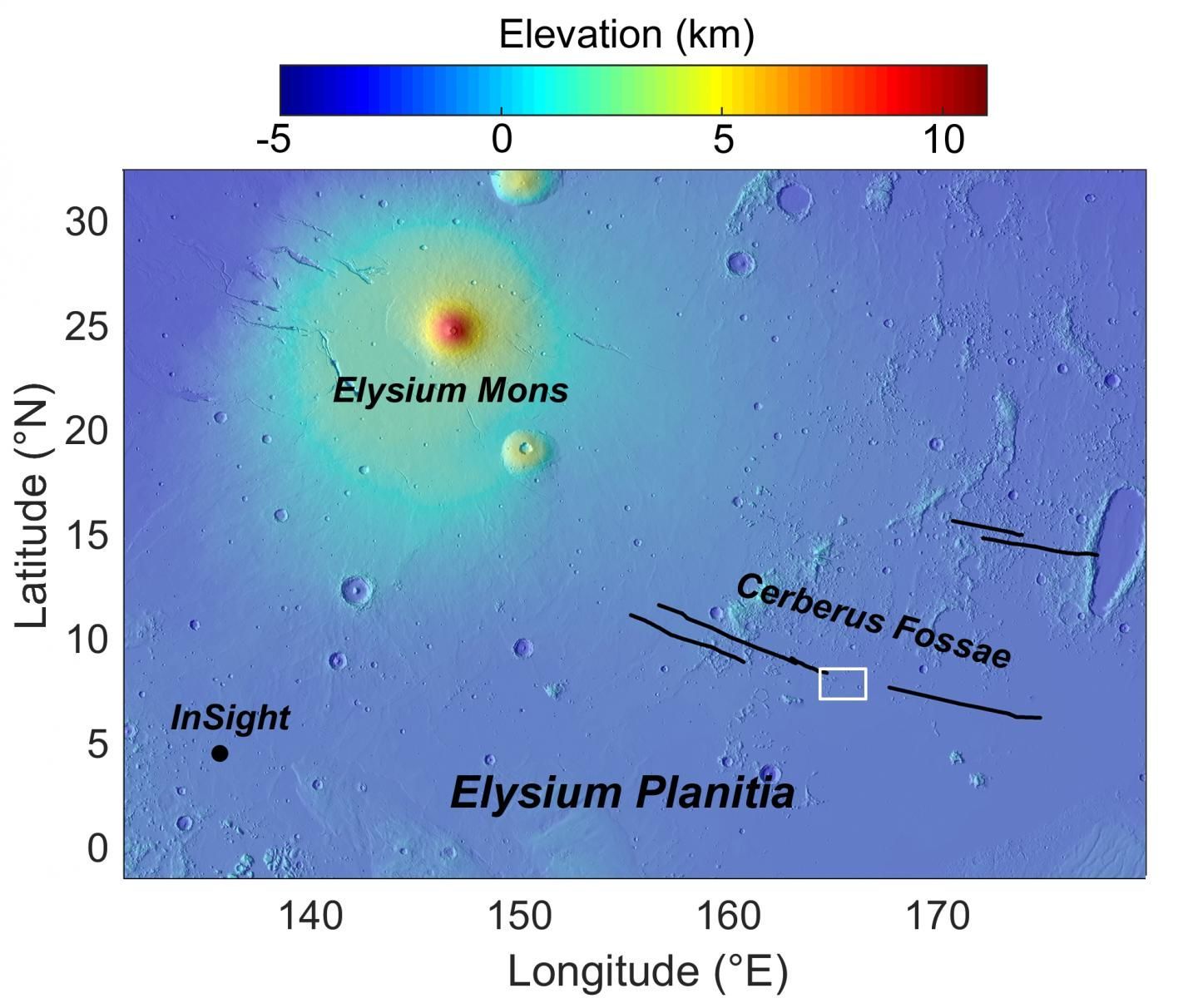 Elysium Planitia, the region of recent explosive volcanism (white box) and NASA’s InSight lander. Overlooking the plain is the Elysium Mons, a volcano rising nearly eight miles above its base.

Similar volcanic fissures in this region have been the source of massive flooding, perhaps as recently as 20 million years ago, when groundwater erupted to the surface.

Andrews-Hanna’s research group continues to investigate the causes of the rash. Pranabendu Moitra, a researcher in the Arizona Department of Geosciences, probed the mechanism behind the eruption.

An expert in similar explosive eruptions on Earth, Moitra developed models to examine the possible cause of the Martian eruption. In a forthcoming article in the journal Earth and Planetary Science Letters, he suggests that the explosion could have been the result of gases already present in the Martian magma, or that it could have occurred when the magma came in contact with Martian permafrost.

“The ice melts into water, mixes with the magma and vaporizes, forcing a violent explosion of the mixture,” Moitra said. “When water mixes with magma, it is like pouring gasoline on a fire.”

“The ages of the eruption and the impact are indistinguishable, raising the possibility, even speculative, that the impact actually triggered the volcanic eruption,” Moitra said.

Several studies have shown that large earthquakes on Earth can cause magma stored below the surface to erupt. The impact that formed the Zunil crater on Mars would have rocked the Red Planet like an earthquake, Moitra explained.

While the most spectacular giant volcanoes elsewhere on Mars, such as Olympus Mons, the highest mountain in the solar system, tell a story of the ancient dynamics of the planet, the current hotspot of Martian activity appears to be in the relatively featureless plains of the Elysee Palace of the planet. Region.

Andrews-Hanna said it was remarkable that an area is home to the epicenters of current earthquakes, the most recent flooding, the most recent lava flows and now an even more recent explosive volcanic eruption.

“This may be the most recent volcanic eruption on Mars,” he said, “but I think we can be sure it won’t be the last.”

The volcanic deposit described in this study, along with the ongoing seismic rumble inside the planet detected by InSight and possible evidence of methane plume releases into the atmosphere detected by NASA’s MAVEN orbiter, suggest that Mars is far from a cold and inactive world, Andrews -Hanna said.

“All of this data seems to tell the same story,” he said. “Mars is not dead.”

– This press release was originally posted on the Arizona Website. It was edited for style

Prominent Liverpool doctor warned of hike coronavirus hot spots are volcanoes that could explode and spread disease across the country. Scientists assess the impact of detentions scheduled for June 21, dubbed Freedom Day, and if that could be derailed by an increase in infections fueled by the Indian variant. There are a few hotspots in […]

Have volcanoes stabilized the temperatures on the Earth’s surface?

London: A new study has found that volcanoes were responsible for stabilizing Earth’s surface temperatures and acted as a safety valve for Earth’s long-term climate. The results of the study were published in the journal “Nature Geoscience”. Scientists at the University of Southampton have discovered that vast chains of volcanoes were both responsible for the […]

Scientists at UC Berkeley have detected previously unknown channels of slow seismic waves in the Earth’s upper mantle, a discovery that helps explain the “hotspot volcanoes” that give rise to island chains such as Hawaii and Tahiti. This 3D view of the first 1,000 kilometers of the Earth’s mantle under the central Pacific shows the […]